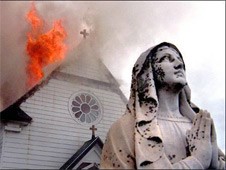 Madhya Pradesh, September 29, 2014: The burning of a church in India’s Madhya Pradesh has stoked fears of widening religious violence against Christians in the Hindu-majority state.

State police said they are searching for suspects responsible for the church torching in a village in Mandla district. The church, part of the Kerala-based Believers Church denomination, was found severely damaged when members of the congregation gathered for morning prayers on Friday.

The church’s pastor told police that attackers broke open the main door of the building and set fire to a Bible, the carpet, musical instruments and other items used for worship.

The fire was “so powerful that its flames even spoiled the walls of the church,” Pastor Rajesh Parthe said in his police complaint. Attackers also broke three crosses erected outside the church.

Human rights groups say Madhya Pradesh is one of several states where religious violence has been a major concern. Christian leaders in the state say they have recorded many cases of attacks against Christians since the Hindu-nationalist Bharatiya Janata Party (BJP) came to power in 2003 state elections.

“In the past decade of BJP rule in the state, we have recorded at least 200 major attacks against the Christian community, such as this,” Jerry Paul, general secretary of Isai Mahasangh, a Christian advocacy group based in the state capital, Bhopal, told ucanews.com on Monday. “There are many unrecorded.”

In many cases, suspects are neither arrested nor punished. Paul said this perceived impunity emboldens others to engage in anti-Christian violence.

Parthe, the church pastor, said this is the first time in 10 years that his congregation has been hit by violence.

A government source, who is not authorized to speak to the press and therefore has requested anonymity, told ucanews.com that the village where the church was burned has no history of sectarian troubles. Given the history of communal violence in the state, police are concerned that the attack may be an attempt to divide people along religious lines, the source said.

Local police have yet to make arrests and have announced a reward of 15,000 rupees, or US$250, for information leading to an arrest. 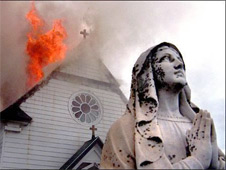