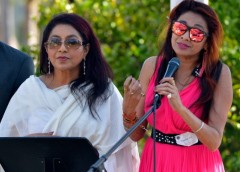 Jeffrey Deskovic recounted his own 16 year journey from being wrongfully convicted  to eventually being exonerated by connecting the red flags of false allegations that have clearly been established in the wrongful conviction of Anand Jon Alexander (who recently won all outstanding out-of-state cases http://www.indialife.us/article.php?id=99457).

Paying it forward, The Deskovic foundation has already gotten over half-a-dozen people home from prison. Alongside Mr. Deskovic was the founder of "It could happen to you", Mr. Bill Bastuk, raising awareness and activism and is part of the International Innovators core panel. "In almost a decade of researching hundreds of wrongful conviction cases...The Anand Jon Alexander case wins the gold medal, as it stands out as one of the most pervasive examples of prosecutorial misconduct we have ever seen." - Bill Bastuk

Former CA Assemblywoman Patty Lopez, who authored Assembly Bill 1909, passed into law signed by Governor Jerry Brown in 2017, noted how the law enforcement misconduct in the Anand Jon case was "utterly shocking.”  This fact was echoed by counsel Rajish Jose, commutation Attorney Tim Milner, and by the other experts and fellow panelists.

Jeffrey Deskovic took on this mission after researching such cases thoroughly, and he is scheduled to be on the core panel of the international innovators tour going nationwide and worldwide.  Attorney Raj Jose presented hard evidence of Anand Jon's factual innocence, how it had been knowingly withheld by the Beverly Hills Police for almost a decade, and the documented conspiracy to "trick and trap" him using private messages exchanged through a popular social media platform.

Website Developer and Author C.J Gilbert spoke on how the rise of technology within the last decade has brought both positives and negatives with it. It’s now easier to prove and verify facts using new technologies and innovations. And yet, we must also guard ourselves against those who would create false profiles and social media accounts to make accusations and wrongful claims. This was further confirmed by experts and investigators like Eric Agaki, and court appointed investigator Steve DiLorenzo, who described how proper investigations are the bedrock of a fair trial without which wrongful convictions can happen to anyone.

Attorney Rajish Jose added how there is not a single scratch on anyone and Mr. Alexander has no history of violence or drugs or gangs, and even passed a lie detector/polygraph test. He emphasized how after the Beverly Hills Police themselves caused extraordinary delays, and got caught withholding critical favorable evidence, their efforts to then try to "procedurally bar" Mr. Alexander's relief efforts under supposed "untimeliness" only displayed the absurdity of how law enforcement is trying to be "rewarded for their own misconduct."

based Attorney Tim Milner added details about the stunning juror misconduct and racist xenophobia that crippled any chance of a fair trial and urged Governor Brown to at least commutate the draconian 59 years to life sentence Mr. Alexander is suffering.  Community leaders like the host Dr. Marwah and Mr Rajendra Vora spoke up, outraged by the crisis while attendees like Attorney Etan Lorant, Shashi Abraham, American Justice Alliance V. P. Maggi Khalon, along with the panelists, made a unified stand to campaign until no innocent man or woman was left behind.

While minority males are the biggest sufferers of injustice, wrongful convictions can indeed happen to anyone of any race and gender as seen from Amy Ralston Povah, who described her own journey as a federal prisoner for almost a decade based on crimes erroneously attributed to her.

After creating an Innovative Sisterhood of Activism and upon being pardoned by President Clinton, she went on to create a foundation that specialized in clemency.  A local native, Ms Povah’s warning against unscrupulous prosecutors who abuse their power and position only further validated the need for this movement.

Fresh off the victory in getting New York Governor Cuomo to sign the country's first ever commission watchdog group over Prosecutors, Bill Bastuk and Jeffrey Deskovic also discussed how to build a coalition and get similar safeguards in place all over the country. This is especially needed in states like , with a track record of harboring notorious law enforcement who are a prime factor as to why innocent people get convicted.

"Whether we speak of better conditions inside, clemency, rehabilitation, second chance or better education it all boils down to a change for making this world a better place from this powerful platform of International Innovators of Justice."   - Event Moderator, Ms Mini Guleria”.

A bevy of dynamic students and models volunteered with hosting the lunch by Tandoori Kitchen, which sponsored a variety of exotic foods to the dozens of supporters and guests that came from across the country and all over the world. Prestigious institutions including a group with Professor Singh, the Dean of neighboring 's law school.

Linda Najarro, a law school grad, who just took the bar exam, expressed her enthusiasm in being part of such a powerful movement "reiterated why I wanted to be a lawyer in the first place.”