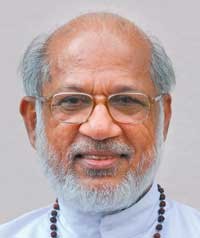 Pope named 22 new Cardinals, including Major Archbishop George Alencherry, whose profile is described below. Late Cardinal Valerian Gracias, Archbishop of Bombay, was the first Indian to become a cardinal in 1953. Other Latin rite cardinals from India are Duraisamy Simon Lourdusamy, Simon Pimenta, late Lawrence Picachy, Ivan Dias, Telesphore Placidus Toppo and Oswald Gracias, the present Archbishop of Bombay. The new cardinal-designate said his appointment was a recognition for the country and the Syro Malabar Church and said he would follow the examples of his Syrian rite predecessors, cardinals Joseph Parecattil, Antony Padiyara and Varkey Vithayathil.

The CSF congratulated him and those who would want to do so, may do so at
Cardinal Mar George Alencherry
Major Archbishop’s House
Ernakulam, Kochi - 682 031,
P.B.No. 2580, Kerala, India
Phone: 0091-484-2363664
email: cardinal@ernakulamarchdiocese.org

The initiation & part of KCBC
Alencherry, 66, was born in the parish of Thuruthy in the archdiocese of Changanacherry as the sixth child of the 10 children of Philipose and Mary Alencherry, of whom two others are priests (Jose Alencherry and Francis Alencherry) and another a religious sister (Sr Cherupushpam). Alencherry whose baptismal name is Geevarghese, had his primary schooling at St Mary’s School, Thuruthy and secondary education at St Berchman’s High School, Changanacherry. He began his priestly formation in 1961 at the archdiocesan minor seminary at Parel, Changanacherry.  While he pursued his studies in the minor seminary, he obtained his BA in economics with second rank from St Berchman’s College. After the minor seminary studies, he was sent to St Joseph’s Pontifical Seminary, Aluva where he completed his philosophical and theological studies.

In 1972, Cardinal Antony Padiyara, the then archbishop of Changanacherry, ordained him priest at St Mary’s Church, Thuruthy, for the archdiocese of Changanacherry. Later he continued his higher studies at the Pontifical Institute of Theology and Philosophy from where he obtained his master’s degree in first rank. While pursuing higher studies at Aluva he also served as vicar of the filial church at Periyarmugham in the archdiocese of Ernakulam-Angamaly. After completion of studies at Aluva, Alencherry was appointed as assistant vicar at the Cathedral church of Changanacherry and Director of the Archdiocesan Faith Formation department and was secretary of the Commission for Catechism of the Kerala Catholic Bishops’ Council (KCBC) for three years.

He goes for further studies
After his tenure at KCBC, he was sent to Paris for higher studies where he pursued his studies at Sorbonne University and the Catholic Institute from where he obtained his doctorate in biblical theology. On returning to India in 1986, he was appointed director of the Pastoral Oriental Centre (POC) at Palarivattom and deputy secretary of KCBC. He served the Church in Kerala in that capacity until 1993. Simultaneously, he also served as professor at St Thomas Apostolic Seminary, Vadavathoor. He continued to teach at Vadavathoor until 1997. From 1994 to 1996, he was the protosyncellus of the metropolitan of Changanacherry. When Pope John Paul II established the diocese of Thuckalay in 1996, he was appointed its first bishop. He was ordained bishop on February 2, 1997 at Thuckalay by Mar Joseph Powathil, the then archbishop of Changanacherry.

Following his predecessors
As bishop, he served the Syro-Malabar Church in his capacity of the secretary of the Synod of Bishops and chairman of the Syro-Malabar Major Archiepiscopal Commission for Catechism. He has also served as chairman of the Commission for Laity of the catholic Bishops’ Conference of India (CBCI). Mar George Alencherry has to his credit a book titled Morality Today and Tomorrow in Malayalam and a number of articles on various topics in English and Malayalam. The new major archbishop is proficient in Malayalam, Tamil, English and French. He was elected the spiritual leader of the more than 4mn Syro-Malabar faithful living all over the world in 2011, and became the first elected head of the church. He succeeded Cardinal Varkey Vithayathil who died last year.

VATICAN CITY, 6 JAN 2012 (VIS) - "It is with great joy that I announce my intention to hold a concistory on 18 February, in which I will appoint twenty-two new members of the College of Cardinals". With these words, addressed to faithful gathered in St. Peter's Square to pray the Angelus, Benedict XVI today announced the fourth consistory of his pontificate.   "As is well known", he explained, "cardinals have the task of helping Peter's Successor carry out his mission to confirm people in the faith and to be the source and foundation of the Church's unity and communion". The new cardinals "come from various parts of the world and perform various ministries in the service of the Holy See, in direct contact with the faithful as fathers and pastors of particular Churches". Eighteen of the new cardinals, being under the age of eighty, will be electors. Their names are:

The Holy Father also pronounced the names of four new cardinals who, being over the age of eighty, are ineligible to vote in a future conclave. "I have", the Pope said, "decided to elevate to the dignity of cardinal a venerable prelate who serves as pastor and father of a Church, and three worthy priests who have distinguished themselves for their dedication and service". They are:
- Major Archbishop Lucian Muresan of Fagaras and Alba Julia of the Romanians, Romania.
- Fr. Julien Ries, priest of the diocese of Namur and professor emeritus of religious history at the Catholic University of Leuven, Belgium.
- Fr. Prosper Grech, O.S.A., professor emeritus of several Roman universities and consultor of the Congregation for the Doctrine of the Faith.
- Fr. Karl Josef Becker, S.J., professor emeritus of the Pontifical Gregorian University and for many years consultor of the Congregation for the Doctrine of the Faith.

In closing the Pope invited the faithful to pray for the new cardinals, "asking the Blessed Virgin Mary, Mother of the Church, to intercede that they may always bear courageous and dedicated witness of their love for Christ and His Church".