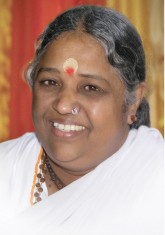 The 60th birth day of the greatest saint of today, Shri Amritanadamayee devi , popularly called Amma is going to be celebrated in grand scale on 26th and 27 th of this month by her devotees all over the world . Apart from  to Guruvandana ,or obeisance to spiritual teacher, the main high lights of the birthday are humanitarian services undertaken by her devotees  on Amma’s call and the launching of new welfare projects to be implemented in the year ahead.

The main celebration takes place in Amritapuri, in Kollam District, Kerala, India, where Amritanandamayee Math is situated. Yearly over a lakh of people participate from across the globe. How needs of such a large assembly of people is managed meticulously is itself a wonder and it is nothing short of showcasing her spiritual power . 60th birthday is considered as an important mile stone in human life. In the case of Amma, it is particularly significant. Because, her life is a story of practicing and spreading universal love, and humanitarian services having a beginning, but no end in sight .

Out of 60 years, Amma spent 38 years for the humanity. Amma’s 60th birthday is not be compared with those of ordinary mortals like us, it has much deeper significance. It is coming off a great soul for the upliftment of humanity. So, it is more appropriately called as 60th ‘Amritavarsham’ or 60 nectarous or immortal years of service to humanity.  Every Amrita varsham is the period for launching massive and new humanitarian programme, which are ever increasing, for the welfare of the humanity, particularly for poor and ailing.

She was born humane. It is reported that though she herself was poor, that did not deter her from being compassionate  towards poor and sacrificing her personal needs to fulfill the needs of others. She agrees that some are born rich and others as poor, as happens in the world, but she does not agree   that poor should be left to fend themselves, on the other hand, she believes that people who are well off should take of those who are poor, , as it is the duty of the healthy to look after the sick. Her humanism is unparallel.

She was deeply religious. But never superstitious. She believes that Religion should be a way to spirituality. She says that spirituality is doing selfless service. She believes in the superpower. She showed lack of interest in what is going on in the material world and always thought about God and higher human values.

She used to sit in deep   meditation for a long time on the sea shore, which was uncommon in her community. On one such occasion, she experienced divinity in her. Her family members expected her to lead the life of an ordinary householder and never to become a mendicant. Her mission was nurturance of humanity. It took some time to her parents, relatives and her community to recognize that she was not ordinary child, but one with divine powers. She showed unusual signs while she was delivered. While new born child cries, she, it was reported that she smiled when she was delivered.

Where ever there is call for help, Amma is there to provide the needed help, as mother takes care of the needs of her child. She is highly spiritually elevated soul and number of his devotees is ever increasing cutting across, Religious, linguistic, ethnic, geographical and other barriers. She has risen to the status of universal mother.

We find her global presence .She gives hope to those, who in spite of their affluence lost all hopes in life and acts like anchor in the lives of those who would otherwise go astray .She is a great Guru who is always with her devotees, irrespective space and time .Her spiritual powers are inestimable .She is above joys and sorrows. She is embodiment of virtues with no trace of vices.  She may not be particularly happy about her birthday celebrations, as we ordinary mortals are .

Her birth day festivities are moments of joy and excitement to her countless devotees, who are inspired to do selfless humanitarian and social service  By allowing her birth day to be celebrated,  she is giving opportunity for her children  to be happy. She is a great vedantin . She tells children that they need not worship her or God, but worship their soul. She says that God is within each one of us and that what we should try is to experience within one self. She sees divinity in all the creations in the universe, including plants and animals.

Hence she loves nature, plants and animals. She has named the temples she built as’Brahmastanams. and people irrespective of their castes, are made to serve as priests. She is against all barriers built by man like Religion, caste etc which divide people. She is a force for unifying the entire humanity.  She speaks of universal brotherhood. She believes that one’s greatness comes not from family  or social background , but  by the purity of one’s actions She insists on cleanliness, which according to old saying is Godliness .It is neglected today in the modern cities due to which communicable diseases take heavy toll of human lives Amma joins the cleaning her team in Ashram  many times .

She even leads cleaning teams in cities which are highly polluted as one of her programmes. For instance, she once led her devotees, belonging to both upper and lower strata to clean up the filthy streets of Calcutta. In other words, she does not simply preach, but preaches, what she does. She walks the talk .She creates awareness among the masses about their civic duties by her personal examples .She does not stay in the ivory tower of  philophical thinking, but she comes down to common men’s level , as Srikrisna was with his friends and women of Vrindavan  and works with them. The difference is she is totally detached from expectations of gains from her actions. In other word her actions are pure and selfless.

She practices the best form of action, given in Bagavad Gita called ‘Niskama karma’ that is acting without desire for the fruit of action. Showing compassion and serving needy are themselves sources of perennial joy. Serving fellow being is considered as serving God .In that sense, she is a great ‘karma yogi’, the present century has witnessed.

It is our  great fortune that we live , when great soul like Amma lives.Amma’s  humanitarian programmes are targeted  towards  suffering humanity, poor, sick,disadvantaged and depressed. Everyone including children, male, female, young or old, belonging to different Religion, caste, ethnicity and so on are all equal to her. She feeds hungry mouths, gives   shelter who  are shelterless or lost   due to natural havocs , rehabilitates  victims of natural  disasters by taking care of all their needs meticulously,  provides free education and training in employable skills and making people self-reliant, provides  best medical care  free to those who cannot afford medical expenses, makes people who are dejected in life  to get back their confidence in themselves, elevates people in the realm of spirituality  to face the challenges of  modern  life, develops service-mindedness in people,  nurtures the talents and power  of  youths for the benefit of the country, develops  character in the youths, while at the same time giving all the facilities  for gaining state of Arts education , the list is endless.

She is the proponent of our ancient Indian values enshrined in Vedas, Upanishads, Ramayana, Mahabharata, Bhagavad Gate and so on.  She is the torch bearer of world peace in the national and international forums. Her planning and execution power remains t o be a mystery .She executes massive projects at ease and in time that iis unthinkable even for Heads of Governments with all their unlimited resources. In spite of her hectic programmes, she remains calm, composed and ever active and cheerful. She has a unique way of showering her love to whom so ever approaches her and that is by hugging and kissing by which people experience ecstasy. Because of this, she is known outside the country as ‘hugging saint ‘ just like Swami Vivekanda was known as ‘travelling monk ‘ People who went to her to convey their grievances and  intending to ask for something, totally forget about those, in her presence and shed tears of joy experiencing ecstasy, just like Lord Srikishna’s childhood  friend Sudhama or Kuchela in the midst of joy in the company of his friend,  forgot to ask  Krishna for wealth, the purpose for which he visited Krishna.The  legitimate needs  are fulfilled , without  asking , when she blesses,  just like  Kuchela was made rich by Lord Krishna without Kuchela asking for it.

Self-realized persons like Amma knows everything in the minds of others.  She had exhibited miracles such as curing incurable diseases, but it is not her way to exhibit her supernatural powers all the time to attract people. People are attracted to her like iron to Magnet. Her every movement is noble and purposive, in the sense it produces something appropriate, which is incomprehensive to our limited intellect. She is a global manager of her institutions although she is always on move, thus her managerial skill and acumen   remain as secret.

We cannot expect this kind of ingenuity in an ordinary person. It is here, we understand that she is divinity in human form, who came to earth when the morality and righteousness are fast declining. , as told in Bagavad Gita that great souls take birth on earth, when the society loses its moral fiber to redeem the society from downfall. Her birth was like that of Lord Krishna who was to redeem righteousness in the world.

She is spontaneous like child, which is possible only in the case of those whose mind is pure. We can say she was a gift of God to humanity as Lord Jesus was. What a massive building of institutions devoted to human cause, she built within a shortest span of 38 years? It is possible for a person only with divine power.

So there is every case to celebrate her birth day and for us to immerse in joy on the occasion. But, at the same time Amma would be really happy with her children only if they follow her life, which are personal examples of ideals and her teachings and move on the path of life shown by her to us. Let us pray God that she is blessed with several years, so that we can be under her motherly care and fatherly guidance.