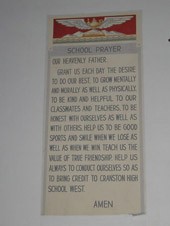 Rhode Island: A federal judge has ruled that a Rhode Island high school must tear down a prayer banner that encouraged students to be kind and helpful because it offended non-Christians and was a violation of the U.S. Constitution. District Court Judge Ronald Lagueux ruled that the prayer banner at Cranston High School West must be removed immediately because it promotes religion. Jessica Ahlquist, an atheist student, had sued the city of Cranston and the high school after they initially refused to remove the banner.

The prayer, which has been posted at the school for decades, begins with the words “Our Heavenly Father” and ends with “Amen.” It encouraged students to be kind, to do their best in school and to learn the true value of friendship.

Prayer Banner – photo by AP
“We are so proud of Jessica for fighting to protect church-state separation,” American Humanist Association Executive Director Roy Speckhardt said in a written statement. “Seh recognized injustice, stood up for what is right, and persevered in the face of harassment. She fought for the rights of nonbelievers and religious minorities and is an example for everyone.”

City officials defended the mural and called it a historical artifact – noting that it served no specific religious purpose. It’s unclear when or if the school will remove the banner.

David Bradley, the man who authored the prayer when he was a seventh grade student, told WPRO that he is furious about the court ruling.

“I am upset, disappointed and not to say, outraged,” he told WPRO. “It’s a shame that some judge with an appointment out of a Cracker Jack box can make a ruling like that.”

Bradley said the student who filed a lawsuit is being used as a pawn by the American Civil Liberties Union.