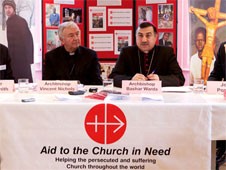 UK, November 04, 2014: The Princes of Wales has spoken out about the “horrendous and heartbreaking” persecution of religious minorities around the world.

Prince Charles made the remarks about religious freedom in a recorded video message to the charity Aid to the Church in Need, which launched its Religious Freedom in the World Report – 2014 today.

In his message, played at the report’s launch at the House of Lords, the Prince said: “The horrendous and heart-breaking events in Iraq and Syria have brought the subject of religious freedom and persecution to the forefront of the world’s news. We have learnt with mounting despair of the expulsion of Christians, Muslims and Yazidis from towns and cities that their ancestors have occupied for centuries.

“Sadly, incidents of violence in Iraq and Syria are not isolated. They are found throughout some, though not all, of the Middle East; in some African nations; and in many countries across Asia.”

The Prince has become one of the most high-profile names to speak out about the persecution of Christians. Last December he held a reception in Clarence House in response “to the growing plight of Christians threatened by persecution in the Middle East. Having listened to their concerns, I did my best to highlight the gravity of the crisis.”

In September he wrote a letter to Chaldean Patriarch Louis Raphael Sako, stating that he was “heartbroken” by the situation in Iraq, and explaining that he had sent a cheque to Aid to the Church in Need to help their work in the Middle East. This winter the charity is launching its biggest ever drive to provide shelter, food and education to 120,000 displaced Iraqi Christians in the Kurdish-controlled north of the country.

The Prince said this week: “It is an indescribable tragedy that Christianity is now under such threat in the Middle East – an area where Christians have lived for 2,000 years, and across which Islam spread in 700 AD, with people of different faiths living together peaceably for centuries.”

He added: “It seems to me that our future as a free society – both here in Britain and throughout the world – depends on recognizing the crucial role played by people of faith.”

Prince Charles also suggested “several tangible courses of action”, first and foremost of which “rather than remaining silent, faith leaders have, it seems to me, a responsibility to ensure that people within their own tradition respect people from other faith traditions. We have yet to see the full potential of faith communities working together.”

“Such efforts aimed at peace and mediation are possible. The report from Aid to the Church in Need highlights the example of a Muslim Imam, a Catholic Archbishop and a Protestant Minister coming together to form an inter-religious peace group in the Central African Republic. These seeds of hope can germinate even in nations and regions torn apart by war and violence,” he said.

He also called on governments to do their best to uphold Article 18 of the Universal Declaration of Human Rights upholding the freedom of religion. “Yet even in the West this right is often challenged,” he said. “Sadly, in many other countries, an absence of freedom to determine one’s own faith is woven into the laws and customs of the nation.”

The report by Aid to the Church in Need includes an introduction by Dr Paul Bhatti, brother of murdered Pakistani minister for minorities, Shabhaz Bhatti.

The report concludes that of 196 countries in the world, 81 countries – or 41 percent – are identified as places where religious freedom is impaired, either “high or medium”, or is in decline. Of the others, 18 per cent were “of concern” and the remaining 41 per cent included “no concerns”.