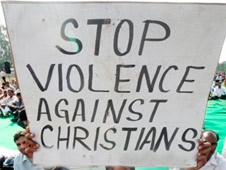 I, Johnson James,  have been in Trikaripur, Kasaragod district, Kerala since 1999 as a preacher to serve our Almighty. Till 2003, I conducted prayers in the rent houses where I and my family used to stay. As many local people came forward for prayers, in the middle of 2003 I have started conducting Sunday meetings at JC’s Hall, near Trikaripur bus stand.

On September 28, 2014, two people came to our prayer hall, threatened all of us and then locked the hall from outside. As there were almost 60 members in the hall including women and children we were forced to break the backside window and then one of our member went outside through that window and opened the door. When we were breaking the window a stone suddenly fell on my leg and I was injured. I have visited doctors many times and now I have a bandage tied around my leg.

On October 17, 2014, these organizations surrounded the Panchayat office regarding this and as a result Panchayat Secretary instructed us to move our prayer meetings from JC’s hall. Due to this, on October 19, 2014, i.e., Sunday, all the believers had a get together at my rent house. At 10:30 a.m., almost 25 people surrounded my house, entered forcibly into the room, destructed all the chairs and furniture and harassed the people who came for prayer. Almost at 11:15 a.m. police came and rescued us from those people. On the same day, in the evening, I went to Chandera police station and registered a complaint against them.

Till now there is no improvement in our situation. They warned me that they will kill me if I am proceeding with the same, so there is a literal need of prayers of all the believers. Unfortunately, now we do not have a situation where all the believers can get together for prayer meetings. On top of that, JC’s hall members have rejected the permission to conduct prayer meetings at the hall and requested us to vacate the place.