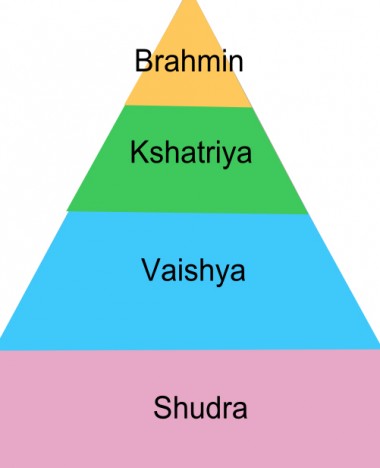 Caste hierarchy is the major obstacle to the goal of social justice and it continues to be a major obstacle to social progress even today. There are many a theories, which have tried to understand its origin. The latest in the series is the attempt of RSS to show its genesis due to invasion of Muslim kings. Three books written by RSS ideologues argue that Islamic atrocities during medieval period resulted in emergence of untouchables and low castes.  The books are "Hindu Charmakar Jati", "Hindu Khatik Jati" and "Hindu Valmiki Jati".

The Sangh leaders claimed that these castes had come into existence due to atrocities by foreign invaders and did not exist in Hindu religion earlier. According to Bhaiyyaji Joshi, number two in RSS hierarchy, 'shudras' were never untouchables in Hindu scriptures. 'Islamic atrocities' during the medieval age resulted in the emergence of untouchables, Dalits. Joshi further elaborated, "To violate Hindu swabhiman (dignity) of Chanwarvanshiya Kshatriyas, foreign invaders from Arab, Muslim rulers and beef-eaters, forced them to do abominable works like killing cows, skinning them and throwing their carcasses in deserted places. Foreign invaders thus created a caste of charma-karma (dealing with skin) by giving such works as punishment to proud Hindu prisoners."

The truth is contrary to this. The foundations of the caste system are very old and untouchability came as an accompaniment of the caste system. The Aryans considered themselves superior, they called non-Aryans krshna varnya (dark skinned), anasa (those with no nose), and since non-Aryans worshipped the phallus, they were considered non-human or amanushya. (Rig Veda: X.22.9) There are quotes in the Rig Veda and Manusmriti to show that low castes were prohibited from coming close to the high castes and they were to live outside the village. While this does not imply that a full-fledged caste system had come into being in Rig Vedic times, the four-fold division of society into varnas did exist, which became a fairly rigid caste system by the time of the Manusmriti.

Untouchability became the accompaniment of the caste system sometime around the first century ad. The Manusmriti, written in the second–third centuries ad, codifies the existing practices which show with utmost clarity the type of despicable social practices that the oppressor castes were imposing upon the oppressed castes. The first major incursions of Muslim invaders into India began around the eleventh century ad, and the European conquests of India began in the seventeenth–eighteenth centuries.

Over time, the caste system became hereditary. The rules for social intercourse as well as establishing marriage relations were laid down by the caste system. Caste hierarchies also became rigid over time. The shudras began to be excluded from caste society, and ‘upper’ castes were barred from inter-dining or inter-marrying with them. Notions of ‘purity’ and ‘pollution’ were enforced strictly to maintain caste boundaries. Shudras became ‘untouchables’. It is this rigid social division that Manu’s Manav Dharmashastra (Human Law Code) codified.

Golwalkar, the major ideologue of RSS ideology defended it in a different way, ‘If a developed society realizes that the existing differences are due to the scientific social structure and that they indicate the different limbs of body social, the diversity (i.e. caste system, added) would not be construed as a blemish.’ (Organiser, 1 December 1952, p. 7) Deendayal Upadhyaya, another major ideologue of Sangh Parivar stated, ‘In our concept of four castes (varnas), they are thought of as different limbs of virat purush (the primeval man)… These limbs are not only complimentary to one another but even further there is individuality, unity. There is a complete identity of interests, identity, belonging… If this idea is not kept alive, the caste; instead of being complimentary can produce conflict. But then that is a distortion.’ (D. Upadhyaya, Integral Humanism, New Delhi, Bharatiya Jansangh, 1965, p. 43)

Social struggles to oppose this system and the struggles to escape the tyrannies of caste system are presented by Ambedkar as revolution and counter-revolution. He divides the ‘pre-Muslim’ period into three stages: (a) Brahmanism (the Vedic period); (b) Buddhism, connected with rise of first Magadh-Maurya states and representing the revolutionary denial of caste inequalities; and (c) ‘Hinduism’, or the counter revolution which consolidated brahman dominance and the caste hierarchy.

Much before the invasion of Muslim kings, shudras were treated as untouchables and were the most oppressed and exploited sections of society. The rigidity and cruelty of the caste system and untouchability became very intense from the post-Vedic to Gupta period. Later, new social movements like Bhakti, directly, and Sufi, indirectly, partly reduced the intensity of the caste oppression and untouchability. This doctoring of the history by Sangh ideologues is motivated by their political agenda and tries to hide the truth.