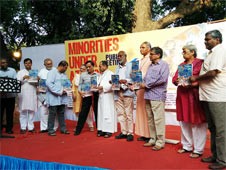 New Delhi, September 27, 2014: Civil society activists and representatives of religious minorities have called upon the Central and State Governments to take urgent action to end the orchestrated and motivated campaign of hate and violence  which targets and coerces minorities, and impacts on communal harmony in towns and villages in many parts of the country.

The hundreds of incidents of “Shuddhikaran” and “Ghar Wapsi” against Muslims and Christians specially in Uttar Pradesh, Madhya Pradesh and Chhattisgarh, and the mobilisation against the so-called “love jihad” has terrorised youth in these regions. The blatant support from  central and local political leaders to these anti social groups has triggered violence in  many places. The media has recorded over 600 incidents of violence against minorities since the results of the General elections were declared on 16th May 2014. State governments had been tardy in taking action against the guilty. This impunity had further encouraged  the unlawful elements.

A public protest against Attacks on Minorities, was held at Jantar Mantar today to focus attention on  the rapidly deteriorating situations. Speakers  impressed upon  the Prime Minister and Union and State Governments and the Union Government to take action under the law of the land against  those creating disharmony and polarising the people.

A Report on Attacks on Minorities was released at the public meeting endorsed  by over 30 civil right and constitutional right groups and minority right to raise the issue of defence of minority rights, the right to live with dignity as equal citizens of India. The country, several speakers said, needed a Zero Tolerate against Communal and Targetted Violence, and not jsut a moratorium for some years.

Speakers noted that the situation had become so critical that even a person of the eminence of jurist Mr. Fali Nariman went on record to voice his concern,

“We have been hearing on television and reading in newspapers almost on a daily basis a tirade by one or more individuals or groups against one or another section of  citizens who belong to a religious minority and the criticism has been that the majority government at the Centre has done nothing to stop this tirade,” …
“And how does one protect the interest of minorities who (or a section of which) are on a daily basis lampooned and ridiculed or spoken against in derogatory language?”   Mr. Fali Nariman said at  function organised by the National Commission for Minorities at which the Union Minister for Minority Welfare, Dr. Najma Heptullah, was present.

We had hoped that the acrid rhetoric of the election campaign would end with the declaration of the results, and the formation of a new government at the centre. The first 100 days of the new regime have, however,  seen the rising pitch of a crescendo of hate speech against Muslims and Christians. Their identity derided, their patriotism scoffed at, their citizenship questioned, their faith mocked. The environment has degenerated into one of coercion, divisiveness, and suspicion. This has percolated to the small towns and villages of rural India, severing bonds forged in a dialogue of life over the centuries, shattering the harmony build around the messages of peace and brotherhood given us by the Sufis and the men and women who led the Freedom Struggle under Mahatma Gandhi.  The attacks have assumed alarming proportions.

Over 600 incidents of targeting religious minorities have taken place from May to September 2014 in several parts of the country, but especially which have seen, or will soon see, by-elections or elections to the Legislative Assemblies.

The hate campaign, the violence, the open threats have stunned not just the religious minorities, but civil society, jurists and academics. Many of them articulated their concern not just at the violence but at the silence of  the Government.

Many of the incidents of violence were directed against individuals and places of worship of the Muslim community, especially in Uttar Pradesh and Maharashtra. These incidents of violence include at least 36 recorded incidents against the tiny Christian community in various parts of the country. The Christian community, its pastors, congregations and churches, were targets of mob violence and State impunity in dozens of cases in Uttar Pradesh, Madhya Pradesh and Chhattisgarh. Target dates, one of them coinciding with Christmas 2014, have been set to “cleanse” various areas of Muslim and Christian presence. The state apparatus and specially the police often became a party arresting not the aggressors but the victims to satisfy the demands of the mob. There have attempts at religious profiling of Christian academic institutions, and their students in the national capital.

There has been a well planned shift the locus of violence and mobilisations from the urban centres to small towns and rural areas; another course is to keep the “dead-count” low and use variants of everyday, “routine” violence to spread tensions and create panic. Yet another scheme is to convert India-Pakistan relations into a subset of the Hindu-Muslim relations within India. The most prominent method deployed in recent weeks has been the issue of “Love Jihad”.

While the Southern University System of Louisiana in the United States has decided to offer Prime Minister Narendra Modi an honorary doctorate for his work in inclusive growth and in recognition of Mr. Narendra Modi’s contribution towards social transformation, especially for empowering women and minorities in Gujarat, the facts on the ground are very different.

The people and organisations gathered at the Public meeting demand:

Zero Tolerance against Communal and Targetted Violence, including Hate crimes, profiling and attacks on Freedom of Faith as enshrined in the Constitution of India.

Govt of India and State governments should swiftly take action against those who create tension among minorities through their utterances,  by immediately arresting them and filing cases against them.

The Union Home Ministry and State Home Ministries should issue a directive to all Police Posts across the country to treat all citizens equally and not come under pressure from certain groups and harass minorities.

Govt should set up a mechanism to provide conducive environment to all citizens of our country and to ensure defence of minority rights, the right to live with dignity as equal citizens of India. 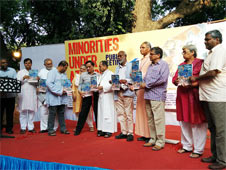