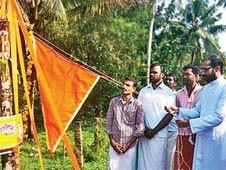 Thiruvananthapuram, September 17, 2014: An “unlikely guest” unfurled the Sangh parivar’s saffron flag to mark the launch of its 2014 Janmashtami festivities in Kerala last week.

Nidheesh Njanakkal, a priest of the local St Francis Xavier’s Church at Thaikkattusseri in Alappuzha district, did the honours on Wednesday morning on an invite from the RSS organ for children, Balagokulam.

This was the first time that a Catholic priest had hoisted the flag at the Balagokulam event.

Balagokulam state general secretary Prasanna Kumar said the flag-hoisting ceremony was a state-wide “annual” ritual that has been going on for 36 years. “Local units invite an eminent person, irrespective of political or religious leanings, to hoist the flag. In Pathanamthitta district, we had Janata Dal MLA Mathew T. Thomas and (actor) Suresh Gopi in state capital Thiruvananthapuram,” he added.

“This time, we held it at 10,000 centres. The event announces the start of the festivities that culminate in a ‘sobhayatra’ (procession) on Janmashtami day.”

This year’s sobhayatra took place today, when Kerala observed Lord Krishna’s birth, the delayed celebration a result of differences in the astrological calendar. North India celebrated the day in mid-August.

Njanakkal, whose church belongs to the Syro-Malabar Catholic division, said he accepted the invite to promote religious harmony. “The event was taking place not far from the church and I attended as it would help strengthen religious harmony,” the young priest told The Telegraph.

The Syro-Malabar Church, headquartered in Ernakulam, is a part of the Roman Catholic hierarchy and is a congregation of Syrian Catholic Christians and, perhaps, the biggest in Kerala.

Vimal Ravindran, an RSS functionary and Balagokulam office bearer for the district, said the invite to the priests was a “conscious effort to reach out to various communities and remove misunderstandings, if any”.

“Every year, we have instances where teachers in some minority-run educational institutions ask children to take off rakhis as they believe they are a religious symbol. We wanted to send the message that it was not so and that it was a national festival which reaffirms the sense of brotherhood,” Ravindran added.

Kerala, where Christians account for a substantial chunk of the population, has sometimes seen tensions between the community and Hindus. In the early eighties, Hindu outfits had successfully fought attempts to erect a cross at Nilakkal, considered a point of entry to the Sabarimala hill temple.

Thaikkattusseri, in the fishing community-dominated Alappuzha district, has had its share of religious strain, too, when the backward Pulayas converted in droves to Christianity.

There has even been instances of cooperation between the two — as in 2009 — when reports of alleged “love jihad” — a perceived conspiracy involving marriage and conversion of Hindu girls — prompted the Vishwa Hindu Parishad and some Christian groups to fight it out together as they both felt threatened.

The Sangh’s latest attempt to reach out to the Church, too, has coincided with allegations of “love jihad” by some groups, although BJP Union minister Rajnath Singh has dismissed such reports.

CPM leaders spied a “political motive” behind the Sangh’s Janmashtami festivities. Sangh sources rubbished the allegation, saying “rivals were jealous of the roaring success” of the sobhayatra. The outfit’s state president, T.P. Rajan Master, told a media conference there would be 10,000 sobhayatras this year.

Last year, the state Congress had tried to wrest the Janmashtami limelight from theparivar and its children’s wing, the Jawahar Balajana Vedi, had drawn up plans to celebrate the day. But it dropped the plan after a report in the Jamaat-e-Islami run Malayalam daily Madhyamam criticised it as an “attempt to saffronise the state Congress”. 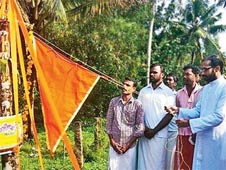