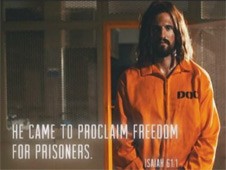 US, August 26, 2014: The man behind the controversial “Jesus Tattoo” movement will launch a new campaign “Death Row Jesus” on Wednesday to spread the message that God was the “worse criminal” while on earth.

David L. Miller of the Little Pencil organization is known for his thought-provoking marketing campaigns that promote the Gospel. Last year, he erected 59 billboards throughout Lubbock, Texas, depicting the image of Jesus Christ clad in tattoos. But this time, he is opting for digital video advertisements that will launch in major cities throughout the U.S.

“When people think about Jesus, they don’t think about him being on death row, but if you think about what he did when he was on earth, that’s really the experience he had,” Miller told Lubbock’s NBC affiliate KBCD 11.

He continued, “We communicate very directly that Christ became the worst criminal in history when he took our mistakes on himself. The second message is we are all equally undeserving of God’s grace.”

Part of the video depicts Jesus in an orange prison jumpsuit as He is beaten to the ground. Another part transitions to the scene of the crucifixion where He is dying at the same time that other inmates in prison are being set free.

Miller says the funding for the video advertisements was raised through merchandise sales from the previous campaign, while adding that he is not out to make a profit.

“Corporations spend an enormous amount of money marketing whatever their product is and there is nothing wrong with that,” said Miller. “We just think in this case we have a much better product and one that’s everlasting, life-changing, and so it’s certainly worthy of whatever we invest in it.”

Last year, Miller’s campaign garnered controversy after he filed a lawsuit in federal court accusing Lubbock’s largest school district of allegedly violating his right of free speech after they refused to display his ad showing a tattooed Jesus on a jumbotron during high school football games.

The tattoos were the words “addicted” and “depressed,” among other negative descriptions on Jesus’ chest and arms, but the message behind them was that Jesus’ love can change people despite their labels.

At the time, the school district said it denied Miller’s request because by their own policies and practices they were prohibited from allowing religious advertisements with the use of government property, based on the Establishment Clause.

A federal judge eventually sided with the school district this past May saying that the district was right to reject a Christian company.

Miller’s Little Pencil organization was founded about a year ago. Its name comes from a quote by Mother Teresa, “I am a little pencil in the hand of a writing God, who is sending a love letter to the world.”