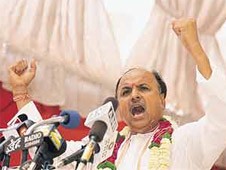 India, July 23, 2014: The violent energies unleashed by communal politics before, during and after the elections have led to social tension that might erupt into great violence any moment. These violent energies have not yet spent themselves as is evident from reports of stray communal violence in the country.

The utterances of two known provocateurs – Parveen Togadia and Ashok Singhal – in the recent days are a cause of concern. If the government at the Centre is at all serious about maintaining law and order it should restrain these two people. I know that as these two are diehard Sangh men the Sangh government would not touch them. Yet, one has the fond hope that the government would act to control the damage for its own credibility.

On July 19 in Jammu Togadia bragged in his familiar style that Muslims would be taught a lesson if they tried to “set fire to Hanuman’s tail”. In his highly toxic rhetoric he told Muslims via a press conference: “You might have forgotten Gujarat 2002 where a lot of your people were killed, but you must remember Muzaffarnagar (killings of last year).”

This speech of Togadia shows that the killings of Gujarat 2002 and Muzaffarnagar are taken as a matter of pride, a badge of honour, by the Sangh, not a cause of shame and disgrace. Secondly, that these massacres were the handiwork and proud “achievement” of the Sangh. They are proud of their deeds and declare it publicly, confident in the knowledge that law cannot touch them. The law is helpless.

Ashok Singhal (a VHP leader like Togadia) too is proud of his acts like Babri Masjid demolition and killings of Gujarat 2002. After the worst killings in Gujarat were over, Singhal announced quietly that “the experiment in the Gujarat laboratory has succeeded.” That meant both the Godhra train attack and subsequent killings of Muslim were pre-planned, organised and orchestrated. It was an “experiment in the lab” that had succeeded.

This time round Singhal declared in Delhi on July 17 that the minorities would not survive in India for too long if they did not learn to respect “Hindu sentiments”. One must ask what exactly those sentiments were. He asserted that the recent elections had proven that elections could be very well won even without the support of Muslims.

If one puts these statements in the backdrop of the ongoing tensions in the country one can take them as forebodings of great communal violence in days ahead. This is not a pleasant prospect as we know law does not exist for these trouble-makers. They were not brought to account in the UPA regime. Certainly, nobody is going to ask them to explain their conduct in NDA regime.

Now, the question is what can be done to stem the tide of lawlessness. It is for the liberal, left and centrist leadership to answer. The community leadership should also sit together to see whether they could do something about it.