DENVER — They call him Big Mountain Jesus: a six-foot statue of Christ, draped in a baby blue robe and gazing out over the majesticFlathead Valley from his perch along a ski run at the Whitefish Mountain Resort in Montana.

He has been there for more than 50 years, erected by the local Knights of Columbus chapter in honor of the soldiers from the 10th Mountain Division who told of seeing similar shrines in the mountains of Italy during World War II.

These days, though, Whitefish’s Jesus statue is at the center of an increasingly bitter battle over the legality of such symbols on federal land.

An atheist group says that because Big Mountain Jesus stands on United States Forest Service property, it is in violation of the constitutional principle separating church and state.

After receiving a complaint about the statue in the spring, the group, the Freedom From Religion Foundation, based in Wisconsin, has been urging the Forest Service not to reauthorize the Knights’ special-use permit for the memorial, which is up for renewal.

“This is a no-brainer,” said Annie Laurie Gaylor, co-president of the group. “A violation doesn’t become less egregious because it’s gone on a long time.” Ms. Gaylor said she would have no problem if the statue stood on private property.

But the statue’s supporters argue that it should be viewed as a military memorial, not as a religious shrine, and they point out that the Forest Service has renewed the permit over the years without issue.

Hiram Sasser, a lawyer for the Liberty Institute, a conservative legal advocacy group, said that because the ski resort is already leasing much of the mountain from the Forest Service, the federal government has no right to ban the statue merely because some people might not like it.

“When the government allows its property to be used for various purposes, like a ski resort, then they open it up to public expression, and they can’t exclude a memorial based on religious grounds,” said Mr. Sasser, whose group is representing the Kalispell chapter of the Knights of Columbus in the dispute.

Caught in the middle of the controversy is the Forest Service, which initially denied the Knights’ renewal application in August, on the grounds that it no longer allowed private memorials of any sort on national forestland.

But after the ensuing outcry, and a determination that the site is eligible for listing in the National Register of Historic Places, it decided to reconsider and is taking public comments on the statue.

“This is a pretty unique situation,” said Jim Peña, acting deputy chief for the national forest system. “Because of the historic and cultural significance of the statue, we’re going to have to relook at it and figure out the right way to go.”

Meanwhile, United States Representative Denny Rehberg, a Montana Republican, has hurled himself into the debate, speaking at rallies for the statue and proposing swapping the 25-foot-by-25-foot piece of land for a parcel owned by the ski resort.

“Would we take the crosses and Stars of David out of Arlington Cemetery?” Mr. Rehberg, who is running for the Senate seat held by Jon Tester, a Democrat, said in an interview. “I don’t think so.”

Riley Polumbus, a spokeswoman for the Whitefish Mountain Resort, which technically is on Big Mountain and is near the town of Whitefish, said the resort was amenable to the swap.

“In addition to this being a dedication to World War II soldiers, it’s a landmark on the mountain,” Ms. Polumbus said. “People say, ‘Meet at Jesus at 11.’ Skiers take pictures with him, wrap him up in clothing and put Mardi Gras beads on him.”

But Ms. Gaylor of the Freedom From Religion Foundation called Mr. Rehberg’s proposal “absurd,” saying the Forest Service’s parcel is owned by all Americans and should not simply be traded for the sake of a religious shrine.

She said her group had received a flood of threatening e-mails over its stance on the statue.

“It’s terribly important that the religious right not be allowed to manipulate this situation,” she said.

Both sides are vowing to go to court depending on what is decided.

A Facebook site, “Save Big Mountain Jesus Statue,” has sprung up, and an “Occupy Big Mountain” rally recently took place, with supporters hiking up to the statue in solidarity.

“We wish the people of Wisconsin would take care of their own business and leave us, and this statue, totally alone,” said Michael Shepard, commander of American Legion Post 108 in Whitefish, which has helped organize the recent rallies.

Mr. Peña said the Forest Service expects to make a decision on the statue in early 2012. 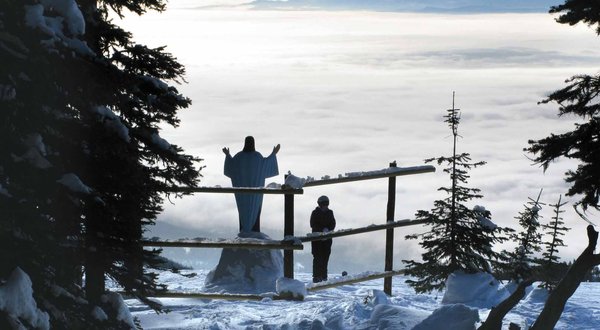