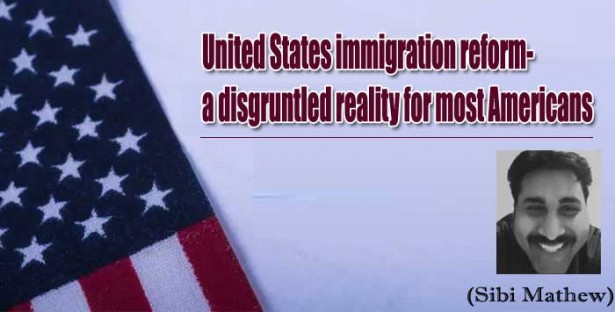 U.S.immigration rate has been skyrocketing over the past threedecades, and it has become increasingly onerous for the natural-borncitizens of America. As the country's political landscape becomingmore and more liberalized, most Washington lawmakers are pushingharder for an all- encompassing immigration reform which is designedto provide nearly 11 million undocumented aliens a path forward forlegal status along with opening the gateway to massive influx ofimmigrants from world nations. If ratified, this bill be a signatureaccomplishment for the Current president Joe Biden and his cohorts.

This controversial bill is expected to traverse  a peristalsis pathwaythrough the legislative floors by getting pulsated by the prolongedfilibuster encounters by the opposition before arriving thepresidential table for his pen stroke of approval. Why you should be aconservative to provide massive drag and inertia to the passing ofthis bill? Take a look!
1.Rapid growth of population.

The Current U.S.population stays around 335million people as of 2021according to an online source. The expected increase has a much morehigher exponential graph for the next several years. If theimmigration allocation cap is lifted, the exhaust velocity of theinflux will be considerably increased resulting in an intangibleeffect for the American public. The current median income is 35000with a standard deviation of the 20?. The U.S GDP remains stagnatedand the national debt greatly being increased annually as a result ofdeficit spending trade. Most economists in U.S.believe that thecurrent economic trend will face a deleveraging phase which has thepotential to affect the labor force and financial system. The currentinflation rate is on its way to provoke the Treasury department toincrease the interest rate to invade inflation and unemployment.Industrial production will encounter a bottleneck as it will behintered by raw material shortage. The government funding for the manyexisting social welfare programs including social security will bedepleted. In short, the proposed immigration reform will create adebilitating effect for America economically for the most part.

2.The U.S.national security will be at risk.

For the President, defending Constitution and protecting nationalinterests are by all means paramount and a matter of dignity andhonor. In addition to the steep-climbing domestic violences,societalunrest,terrorrism, colossal incarceration rate all made our socialfabric much more exacerbated in terms of strength and stability.America is always on alert as the potential violent criminals are onthe rise to commit more serious and heinous crimes. But, if morepeople are introduced to the communities at a fast rate, the lawenforcement will be strained and pushed to the limit. The law andorder in this country will definitely be on the dark side enable moreviolences and unrest. Even today, the police force is facing trainingand equipment inadequacy. Legalizing millions of people withoutrespect to background check and other safety measures at once willpull down on the centrifugal force of enforcement. The ongoing counterterrorism activities initiated by the U.S.goverment is seeing noadditional progress as a result of the expansion and recruitment ofterrorist operatives all across the world. If migration is increased,potential terrorists can legally infiltrate themselves intoU.S.territory with possible motives to commit atrocities against theAmericans. Furthermore, the existing gun laws would allow easy accessto guns of choice for anyone having interest.

3.inequality and racism will be on the rise.
Now, America is grappling to reckon with the racial imbalanceinequity. The African Americans are considered to be getting hit withthe micro villis of racial trouble and the poison-laced Lance ofinequality. 'black lives matter' movement has been gaining enhancedattention, and the opponents were severely excoriated and lambasted.If the immigration bill is passed, Hispanic Americans will outnumberthe Black Americans. Therefore, inequality and racism will continue togain momentum and the racism will be more polarised. The periapsisrepresentated by the Hispanics will be more polarised to the whitesand the apolapsis of Blacks will be more polarised among themselves.This trend will aid the creation of a much more marginalized society.Sectarian violencces will get accelerated and will change its constantvelocity for a distant displacement. Illicit drug smuggling will be onthe rise as the Mexican drug cartels gain their momentum to exploremore opportunities and markets in the USA. The prison system in thiscountry will be out of structural balance and Justice System will beforced inadequately handle trials and cases.

4.Health issues and pandemic will ravage the land with wild lockets and hailstones.

The annual health spending by average Americans increasedexponentially over the past 15years as a result of inadequate foodsupply, malnutrition, poverty,and obesity. Millions more people wereadded to analgesics,hypertension, hyperglycemic, and sex-enhancingmedications. The silent killer is once again exposing it's gnashingteeth and poisonous stings against the Black Americans. Alzheimer'sand Parkinson's affecting more white Americans and cancer depressionaffecting all races proportionately all attribute to the rising costof health care in America. Inadequate funding will definitely push theinsurance companies to raise premium cost and deductable detrimentallyfor the insured. Covid-19 has approximately slaughtered 350,0000Americans, and it is on its way to accelerate daily. The new variantis expected to wreck havoc and destruction on the rising slope of theaffected. The developed vaccines ostensibly have no effect on thepandemic and with life-threatening complications. Something has to bedone to curb the disease and contain the spread as it has thepotential to spread through air. Stalling legislation is a way toachieve a stagnation velocity of zero, and whip the air to the top atthe angle of attack to be less pressured.

5.The American presidential leadership will be on its way to complete Democratic party based.
Throughout the past century, presidential leadership has been balancedbetween Democratic and Republican because of the electoral collegedictating the outcome. As anyone know, there are traditionalDemocratic states,republican states,and battle ground states in thiscountry. This traditional balance has become more challenging and thebattle ground states determined the results. Now, because of acompletely liberalized immigrant population gaining momentum to have asay on who must carry the election. Irrespective of internalmigration, immigrants hugely polarised Democratic support, and thishappened in many states including CA,NY,PA,TX,FL. Therefore, theoutcome of the future elections will be decided based on the resultsof these listed states. Due to internal migration along withimmigration, the traditional Texas red state is being transformed intoa blue state. Florida and Pennsylvania will be carried by theDemocrats and Georgia,michigan,and Wisconsin will also produce similareffect. Immigration reform will create a more progressive andliberalized government which tentatively uproot founding principlesand  constitutional guarantee will be interpreted progressivly. Ifthis framework is accepted by the lawmakers, the Washington authoredAmerica will be more like a Gandhi-authored America.

The white population will be looked down and contemptuously treated bythe very people you natured and breast-fed. They will turn their backon you and your Mars mission will be like a rollercoaster ride. Thisarticle is not intended to create fissure among races, but to simplyallocate your cognitive resources to produce a much needed outcome.The heavens declare the Glory of God, and the firmament his artwork.It is time for all of us to recognize and accentuate and morecourageously accept the reality this nation is now facing. Votingreform may be a viable option for the restoration of the integrity ofthe electoral college. I am happy to see that the Americans choosefreedom over life, and I will not forget the sacrifices of the fallenwho gave me the right to live a dignified life. Life alone provides nosatisfaction, but when it becomes meaningful and promising that yieldrejuvenation and excitement.