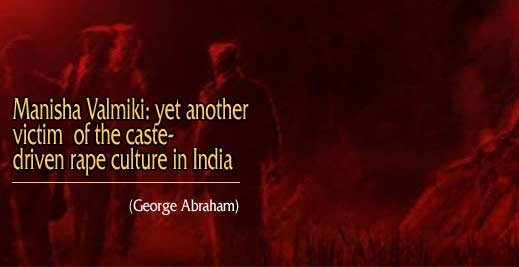 Even as the United Nations deliberated on the concrete actions that would advance gender equality for women and girls everywhere, marking the 25th anniversary of the Beijing Declaration and platform for action – the most comprehensive roadmap for women and girl’s empowerment, the  world  watched once again in horror another rape and murder story unraveling in India’s heartland. Any civilized person would shudder how this 19-year old Dalit girl was terrorized by four upper caste men in the State of Uttar Pradesh. And one wonders why these brutal and horrific incidents continue to happen in India, especially to the Dalits and backward castes, the lower rung of the despicable caste system that is very much alive and well in India after seventy years of independence!

The victim, Manisha Valmiki, a 19-year old, was raped on September 14 in Uttar Pradesh’s Hathras district. The woman’s family told local media that they found her naked, bleeding, and paralyzed with a split tongue and broken spine in a field outside her home. On Tuesday, she died two weeks later after battling severe injuries in a hospital in New Delhi.

Has anything changed since the infamous ‘Nirbhaya case’? No, the country has not learned anything from that gruesome affair and its aftermath. The barbarity and the bestiality involved in this killing once again show the depraved and criminal mindsets of those who perpetrated such heinous acts. The ghastly way this woman was raped and murdered has indeed shaken the nation to its core and terrorized the people of conscience across the world.

To add insult to injury, the Police, who are supposed to be the guardians of fairness and justice, barricaded her family members and locals inside the house and forcibly burned her broken body. The criminal connivance of the U.P. police in siding with the perpetrators of these heinous acts has not surprised those observing the deteriorating law and order situation in U.P. The family was not allowed to see their daughter for one last time and say good-bye. As Yogendra Yadav has said, “even criminals are allowed dignified cremation. Here is a rape victim being cremated by Police at 2.30 AM without family members”!
A senior Uttar Pradesh police officer has now said the forensic report has revealed that the victim who succumbed to her injuries was not raped. Citing a lab report, the ADG (law and order) said the cause of her death is an injury on the neck and trauma resulting due to it. It appears to be the case of the law enforcement officers becoming either silent spectators of goons and henchmen for the caste-driven hierarchy where people of the lower rung do not stand a chance for justice and fairness. At the same time, when we are dealing with this heartbreaking news from Hathras, another story has emerged from the Balram District of U.P., where a Dalit woman died after allegedly gang-raped by two men. At the timing of writing this article, more information on that developing story is still awaited.

The rape and hanging of two Dalit women from the Katra village in Uttar Pradesh not long ago remain fresh in our memory. The father of one of those girls who gang-raped and brutally murdered asked the Samajwadi Party leader and member of Parliament Dharmendra Yadav a question “Why I am asked about my caste when I go to the Police? Am I not a citizen of India’? It is time that this pertinent question needs to be answered not just by a few politicians across the party lines but by the nation itself. What happened in Hathras District and Katra village are horrific crimes of brutality against women that should never have happened.

Millions of Indians everywhere must be feeling the shame of India in the news on the continuing assaults on women. However, these are more than just isolated incidents of criminal wrongdoings but instead emanating from an entrenched caste-driven mindset of these madmen who feel that they have the God-given right to them and are a privileged sect who can therefore get away with murder. These cases have shocked the nation for many reasons; first and foremost, it again shows the ugly truth about the age-old caste system thriving in India but exploited by various political parties. Mr. Shashi Tharoor, a former Congress Minister and Member of Parliament, once was quoted as saying ‘when India castes the votes in an election, it is voting the castes.’ These victims’ family belongs to the Dalit community, whereas the perpetrators of this heinous crime belonged to the higher castes. If one looks at history, the Dalits have been at the receiving end for centuries, being discriminated against by the higher castes with impunity, often being harassed and murdered without having a price to pay. Sadly, Uttar Pradesh is the epicenter of these crimes targeted at these helpless women who were taunted and raped at will, often just for the simple reason they belong to the Dalit community.

This latest incident in Hathras has shaken us all; although stricter laws have been passed since the Nirbhaya case, rapes and abuse of women continue to occur unabated. Recent reports show that rape is committed every 22 minutes, though, the statistics and official records would never reveal the accurate picture as many of these cases go unreported. The Government data published by the National Crimes Bureau shows that crimes against women in 2019 rose 7% over the previous year. The social stigma attached to rape often silences the victim who might be ostracized or ridiculed if they choose to go public. The law enforcement system is not geared to provide sympathetic ears; if anything, they impart fear.

The National Campaign for Dalit Human Rights states that over one-sixth of India’s population, some 170 million people, live a precarious existence, shunned by much of Indian Society because of their rank as “untouchables” or Dalits – literally meaning “broken” people – at the bottom of India’s caste system. Dalits are discriminated against, denied access to land and basic resources, forced to work in degrading conditions, and routinely abused at the hands of police and dominant-caste groups that enjoy the State’s protection. Among the Dalit community and its supporters and sympathizers, Dr. Ambedkar’s statement resounds today more than ever; “My final words of advice to you are: educate, agitate and organize and have faith in yourself. With justice on our side, I do not see how we can lose our battle. The battle, to me, is a matter of joy. This battle not for wealth or power; it is a battle for freedom. It is a battle for the reclamation of human personality”.

Mr. Yogi Adityanath, the Chief Minister of Uttar Pradesh who took reigns of the Government when BJP swept the State elections, has to be held responsible for this terrifying State of affairs with incendiary remarks, often denigrating women once when he said, “women not capable of being left alone and their energy should be regulated, lest it becomes worthless and destructive”. These statements must be emanating from a dogma he represents that is misogynistic and chauvinistic.

The growing culture of violence emanates from the wrong-headed sense of ultra-nationalism and majoritarian arrogance that is polarizing the communities and dividing the nation.  It is time for the nation to call upon the Modi Government to stop paying lip service with slogans like “Beti Bachao, Beti Padhao” and provide true leadership in bringing perpetrators of this pervasive rape and abuse of women culture across the country to justice regardless of their party affiliations and oust any government officials who remain stumbling blocks to that effort.

One dares to ask the NRIs who live in this country in their comfort zone, where is your moral outrage? We are a community that gets riled up at the slightest form of discrimination or stereotyping. Will we ever show the courage to join this ‘battle for freedom’ as Ambedkar called it for the sake of India?
(The writer is a former Chief Technology Officer of the United Nations and the Vice-Chairman of the Indian Overseas Congress, USA)