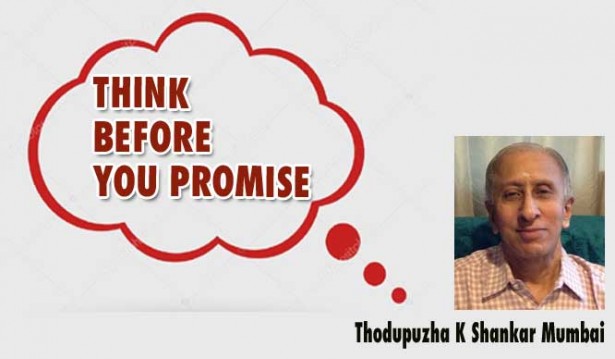 Many a time, we make rash promises which crash later at the feet of either reluctance or inability to fulfil and it results in utter disappointment to the promiser and the promised as well. It is, therefore, essential to muse well beforehand so that any possibility of discord or discontent could be avoided as far as possible. What we should remember is whether the promise can be carried out without any hindrance and both the parties could continue to enjoy the same relation, without any heart burns. Sometimes, such a thought fizzles out and mars our expectation. So hollow promises out of initial excitement, should be avoided as far as possible.  Once promised, it should be accomplished at any cost. Some people promise even costly offerings to various Gods and Goddesses of temples nearer or farther, for fulfilling certain wish, but after getting the wish done, show reluctance or indifference to redeem the vow. Gradually it diminishes and disappears from the mind. Thus, it always remains undone. So before promising to anyone or Gods or Goddesses, one has to think twice and make sure as to whether it could be fulfilled or not at the right time or whether it is affordable.

Close on the heels of this well- known corollary, a small moralistic example is cited here to get a clear understanding about it. Once there was a saint-an Acharya who had umpteen number of disciples who were very much devoted to their master and followed his teachings with utmost faith, reverence and devotion. He nourished their quest with profound spiritual inputs and groomed them to be competent enough not only to face the challenges in life but also to promote and propagate the quintessence of all vedas being - the purpose of human birth on earth is to live a worthy exemplary life and achieve Janma/atma sakshatkara or accomplishment of our birth. He also equipped them with enough wisdom in mythologies and all branches of spiritual science, right from birth to death, the law of karma, the various types of hell, advantages of satsang,  sacrifice,  compassion and selfless timely service to the needy,  etc. The disciples were also dedicated to the master and served him with profound faith and attention.

One day, unfortunately, the master had a massive heart attack and was instantly hospitalised.  Some disciples sat by his side and nursed him attentively.  The doctor came out and announced to the disciples ‘their master has to urgently undergo a heart transplantation’ operation and asked them who would be ready to donate his heart for the survival of their fond master so that he could be saved. All the disciples came forward and readily expressed their willingness to donate. Now the doctors were in a dilemma as to who should be chosen as the donor because everybody wanted to donate his heart for his master and save him from that predicament.

The doctors, therefore, gathered in a room to sort out this issue without hurting the sentiments of the disciples. They finally came out with a viable solution. Accordingly, all disciples   who   were ready to donate their heart, were   asked to assemble in a spacious hall.  Thereafter, an air- filled big balloon was thrown up and upon whose head it falls first, he has to donate his heart for the Acharya. The balloon started flying from one place to another and as it moved towards someone’s head, he kept blowing up and like this, every disciple blew strongly and ensured it did not fall on his head. This blowing of the balloon went on like an interesting game for so much time and it looked as though nobody wanted to donate. Finally, it appeared that nobody wanted to donate his heart when it came to the veritable stage.  Now, we can imagine what must have happened to the master in the absence of a willing donor, though every disciple was visibly moved and   ready to do anything for his master.   It could be clearly decoded from their expressions that everybody was focussed on protecting his own self from the nightmare of losing life! Thus, the proposal did not materialise.

What we have to learn from the above example is that everybody will promise to help us when we are in a critical juncture. But nobody will show up or help us when we are in dire need because, everybody is self-centred in this world and the promise turns out to be hollow in reality.  If anyone goes beyond and helps us par excellence, he may not be a human being for sure, but some angel/deity in human form, descended upon the earth!