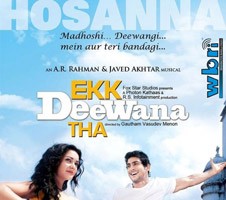 The Catholic-Christian Secular Forum (CSF), takes strong exception to an A R Rahman’s song “Hosanna” in the Hindi movie, “Ekk Deewana Tha” to be released on 17 February, 2012 and has taken up the issue with the authorities concerned to have the song withdrawn. The CSF will launch a public agitation if the same is not heeded.

In a complaint to the music director, besides others concerned like Fox Star Studio, Sony Music and all those responsible for the same. The CSF demands an apology for the same and urged the authorities to act, as it has hurt not only Christian, but also Jewish religious sentiments, Hosanna being a prayer for both communities.

According to Joseph Dias, The CSF general secretary, ” We are not going into the lyrics or vulgar picturisation of the song, which is also objectionable. But, would like to point out that internationally Hosanna is a prayer in the Bible and used by both Jews and Christians, referring to God or Jesus Christ, with strong reverential and religious connotations. The CSF points out that in both these religions, Hosanna is used as follows:

“Hoshana” is a Hebrew word meaning please save or save now. In Jewish liturgy, the word is applied specifically to the Hoshana Service, a cycle of prayers from which a selection is sung each morning during Sukkot, the Feast of Booths or Tabernacles. The complete cycle is sung on the seventh day of the festival, which is called Hoshana Rabbah “Great Hosanna”.

“Hosanna” in Greek is the cry of praise or adoration of God, shouted in recognition of the Messiahship of Jesus on his entry into Jerusalem – Hosanna! Blessed is the one who comes in the name of the Lord! It is used in the same way in Christian praise. Overall, it seems that “Hosanna” is a cry for salvation – God who saves; while at the same time is a declaration of praise of God and is used with great reverence to Him.

The CSF general Secretary adds ” Hence, to use it in a movie where the boy, falls in love with a girl – who belongs to an orthodox Malayali Christian family where watching movies, partying or falling in love are completely taboo  – is mocking and ridiculing the faith of the person. This has hurt religious sentiments and insulted Christian and Jewish beliefs “. Joseph Dias further questions angrily – ” If you would not use Islamic, Hindu or prayers from any other religion in pop secular music, then why do you use Hosanna in a carnal love song of a movie. It trivialises a word that is sacred and uttered with respect by followers of both Christian and Jewish faiths and hence needs to be stopped immediately.

It may be recalled that The CSF and other community groups had only last month complained against those responsible for the movie poster “Who’s There – Kaun Hai Waha” and the director, producer and others concerned had to spend days in custody in Mumbai following police action. Gautham Menon, the noted south Indian film director is responsible for the film “Ekk Deewana Tha”, which is produced by Reshma Ghatala, Venkat Somasundaram and Javed Akhtar being the lyricist.

Those involved with the Hosanna song, as part of the movie are lead actors – Prateik Babbar and Amy Jackson; singers – Leon D’Souza, Suzanne D’Mello and Blaaze, with additional vocals by Vivek Agarwal, Dr. Narayan, V. V. Prasanna, Haricharan Sesh… Photon Kathaas Production and R.S. Infotainment, besides others are also involved and will be legally acted against.