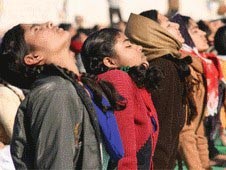 Madhya Pradesh, January 12, 2012: Christian and Muslim schools in Madhya Pradesh defied an order to participate in a mass Hindu sun-worshiping ritual being staged Thursday by the government to remember a renowned ascetic and to gain entry into the Guinness Book of World Records.

Television channels reported students from more than 6,000 schools were among 10 million people who joined the surya namaskar (salute to the sun) in the central Indian state.

The ritual involves practicing a specific sequence of movements in what was traditionally a form of worship to the sun deity Surya.

Participants included state Chief Minister Shivraj Singh Chouhan. The signal to start the ritual was given over government-owned All India Radio.

The event marked the birthday of Swami Vivekananda (1863-1902), an Indian ascetic who introduced Hindu philosophy to the West and who was a participant at the Parliament of the World’s Religions in Chicago, in 1893.

The government had originally ordered students from all schools to practice the ritual, but made it optional after Christian and Muslim groups protested.

However, some principals from Christian schools later said government officials had insisted that all students must take part.

The Church had earlier instructed them not to do so.

Father Muttungal said the ritual is a Hindu form of worship that cannot be allowed in their institutions.

Muslims also refused to take part, saying it was against the tenets of their religion.

Father Muttungal accused the government of attempting to promote communal hatred among students.

Ordering the practice of rites from one particular religion on others in schools is not acceptable in a country that upholds secularism, he said. 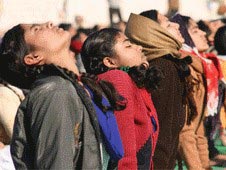