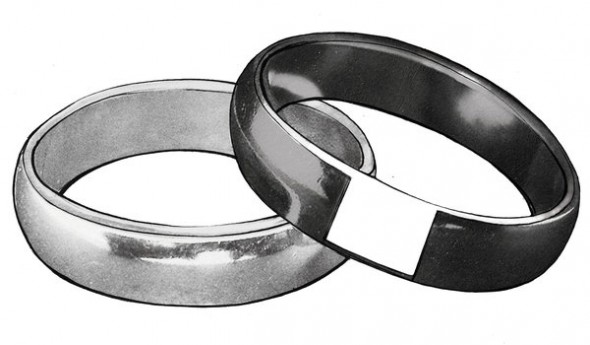 WHAT will life be like for the wives of Roman Catholic priests?

On Sunday, the Vatican announced the creation of the Personal Ordinariate of the Chair of Saint Peter, a special division of the Roman Catholic Church that former Episcopal congregations and priests — including, notably, married priests — can enter together en masse. The Vatican has stressed that the allowance for married priests is merely an exception (like similar dispensations made in the past by the Vatican) and by no means a permanent condition of the priesthood. If a priest is single when he enters the ordinariate, he may not marry, nor may a married priest, in the event of his wife’s death, remarry.

Nonetheless, the Roman Catholic Church is prepared to house married priests in numbers perhaps not seen since the years before 1123, when the First Lateran Council adopted canon 21, prohibiting clerical marriage.

Now as then, the church’s critics and defenders are rehashing arguments about the implications of having married priests in an institution that is otherwise wary of them. But in the midst of these debates, we should pause to ponder the environment that the priests’ wives might expect to encounter. After all, the status of the priest’s wife is perhaps even more strange and unsettling than that of her ordained Catholic husband.

While the early Christian church praised priestly chastity, it did not promulgate decisive legislation mandating priestly celibacy until the reform movement of the 11th century. At that point, the foremost purpose of priestly celibacy was to clearly distinguish and separate the priests from the laity, to elevate the status of the clergy. In this scheme, the mere presence of the priest’s wife confounded that goal, and thus she incurred the suspicion, and quite often the loathing, of parishioners and church reformers. You can’t help wondering what feelings she will inspire today.

By the time of the First Lateran Council, the priest’s wife had become a symbol of wantonness and defilement. The reason was that during this period the nature of the host consecrated at Mass received greater theological scrutiny. Medieval theologians were in the process of determining that bread and wine, at the moment of consecration in the hands of an ordained priest at the altar, truly became the body and blood of Jesus Christ. The priest who handled the body and blood of Christ should therefore be uncontaminated lest he defile the sacred corpus.

The priest’s wife was an obvious danger. Her wanton desire, suggested the 11th-century monk Peter Damian, threatened the efficacy of consecration. He chastised priests’ wives as “furious vipers who out of ardor of impatient lust decapitate Christ, the head of clerics,” with their lovers. According to the historian Dyan Elliott, priests’ wives were perceived as raping the altar, a perpetration not only of the priest but also of the whole Christian community.

The priest’s nuclear family was also seen as a risk to the stability of the church. His children represented a threat to laypersons, who feared that their endowments might be absorbed into the hands of the priest’s offspring to create a rival clerical dynasty. A celibate priest would thus ensure donations from the neighboring landed aristocracy. Furthermore, the priest’s wife was often accused, along with her children, of draining the church’s resources with her extravagance and frivolity. Pope Leo IX attempted to remedy this problem in the 11th century by decreeing that the wives and children of priests must serve in his residence at the Lateran Palace in Rome.

Given this history, I caution the clerical wife to be on guard as she enters her role as a sacerdotal attaché. Her position is an anomalous one and, as the Vatican has repeatedly insisted, one that will not receive permanent welcome in the church. That said, for the time being, it will be prudent for the Vatican to honor the dignity of the wives and children of its freshly ordained married priests. And here, I suggest, a real conversation about the continuation of priestly celibacy might begin.

Until then, priests’ wives should beware a religious tradition that views them, in the words of Damian, as “the clerics’ charmers, devil’s choice tidbits, expellers from paradise, virus of minds, sword of soul, wolfbane to drinkers, poison to companions, material of sinning, occasion of death ... the female chambers of the ancient enemy, of hoopoes, of screech owls, of night owls, of she-wolves, of blood suckers.”

Sara Ritchey is an assistant professor of medieval European history at the University of Louisiana, Lafayette.

THE PLIGHT OF PRIESTS’ WIVES

The Vatican recently announced that it is going to facilitate the process of allowing former Episcopal priests and congregations to enter the Roman Catholic Church as intact groups. “What will life be like for the wives of Roman Catholic priests?” asks Sara Ritchey. She is very worried about what will happen to these women, and ends her piece by advising that “it will be prudent for the Vatican to honor the dignity of the wives and children of its freshly ordained married priests.”

If Ritchey has evidence that married wives of Catholic priests have been brutalized, stigmatized or otherwise oppressed, she should play it. That there isn’t any is obvious. Indeed, there were married priests until the twelfth century, and no tales of woe about their wives have ever surfaced. Admittedly, Ritchey found a monk who made caustic comments about a priest’s wife. But he died in 1072. Surely even an assistant professor can do better than this.

In 1982, two years after the Catholic Church said Protestant clergymen who were married could become Catholic priests, the New York Times did a story about one of these priests and his wife. “Mrs. Parker,” the story said, “is a cheerful woman who said members of the women’s guild at Holy Trinity parish here ‘treat me just like anyone else.’” In 1993, there was an article in The Observer about former Anglican priests who had converted to Catholicism in England, and again no complaints were reported. Indeed, as one wife put it, “If anything, I am more fulfilled now because my husband is so much happier.”

It is obvious that people such as Ritchey are really interested in having women ordained as priests—they oppose celibacy because they think it is an obstacle toward that end. Interestingly, on the opposite side of her op-ed is an editorial criticizing the Supreme Court ruling this week affirming the right of churches to determine its employment strictures. Had the decision gone the other way, lawsuits would have been flying charging the Church with discrimination for not allowing women priests. But the decision was unanimous, effectively closing the door. Looks like Ritchey’s pipe dream hasn’t got a prayer.